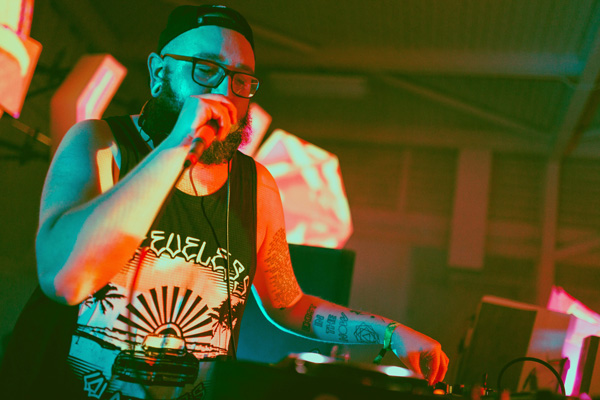 Nobody makes a fun, irreverent banger like DMVU, and rare is the artist who exudes as much warmth, humor, and raw energy as Matthew Jones, but those deeply familliar with his work know that he's got a serious streak.

The culmination of three years of work between 2016 and 2019—the exact time period that represented so much change for Jones as his career exploded, he lost his mother, and countless other ups and downs—results in a gorgeous album that veers wildly away from his hallmark experimental bass and dubstep sounds. Two Pairs Of Eyes, Gazing Only At Each Other is a magnum opus that Jones didn't even know he was creating, it just came to be as the prolific producer added song by song to this overarching work that really stands alone in his catalogue.

Where most of the album falls into the wavey range full of dreamy, ephemeral sadness and stillness even amongst its beauty, today's premiere and the closing track for the album would feel at home on a Coloring Book-era Chance album rather than a Lil Peep backing track, the latter of whom carries a big influence on DMVU. “Ursa Major” is happy, sunny, and bubbly. It's hopeful in a time of hopelessness and audio huge in a time of social distancing. I love Matt's bangers, and I love Matt's sadboi tunes. But what I loved to hear in this collection was a gorgeous song that filled me with joy in the midst of so much dread, because it feels to be like the perfect distillation of who he is as an artist and a person.

Two Pairs Of Eyes is out via Dome of Doom on April 17th on all digital platforms, as well as these kawaii limited edition pink cassettes, available for pre-order now: domeofdoom.lnk.to/twopairsofeyes