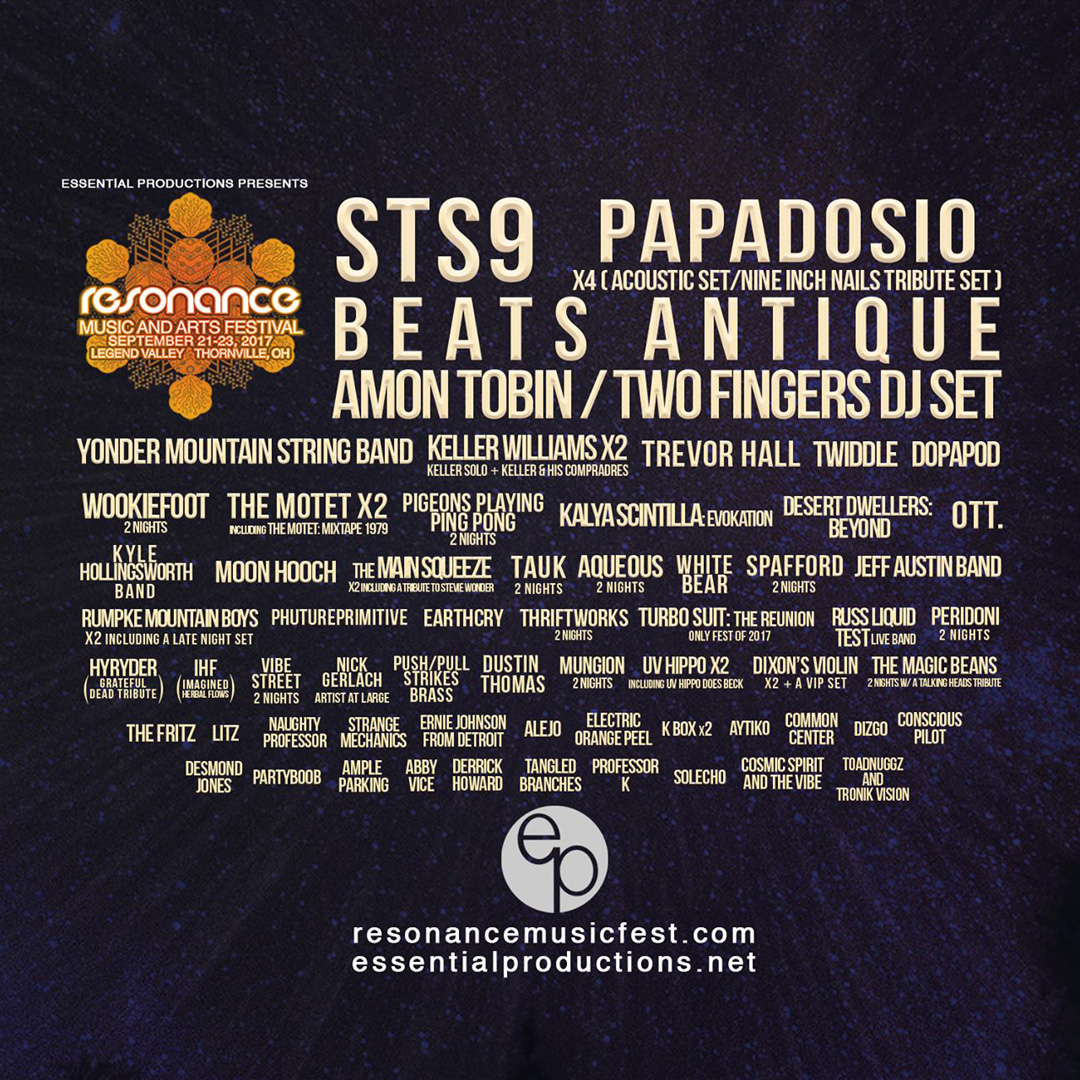 Over the last year or so, I’ve been saying that the state of Ohio is the new mecca for music festivals. This past summer, the state played host to a different festival pretty much each weekend, with each one consisting of an eclectic lineup as well as the close-knit family vibe that Ohio has become known for. With a downright colossal lineup of which has never been seen in the state, Resonance Music & Arts Festival will be the icing on the cake for another incredible festival season.

According to the festival’s website, “The Law of Resonance provides the answers as to how the law of attraction operates and creates the events, conditions and circumstances in your life. A gathering of like-minded, motivated, music loving individuals.” The Law of Resonance also states that not only does attraction help create your destiny, but also the energy that projects from you.

From this statement, it shows that Resonance is not only a music festival, but also a transformational experience created to better the minds, relationships, and lives of every person that walks through Legend Valley’s gates in Thornville, Ohio. This is not only done through the stellar music lineup, but also through a variety of conscious workshops, art instillations designed to be experienced with friends and strangers, and overall message of love and light for all, from September 21-23.

The lineup itself is like something that you only see in dreams, or quite possibly the initial years of Rothbury before it became Electric Forest. It is the perfect mixture of live electronic music, jam bands, psychedelic electronic, funk, and bluegrass between four stages. Whatever style is your flavor or if you can get down to all of it, Resonance is the perfect festival for music lovers. 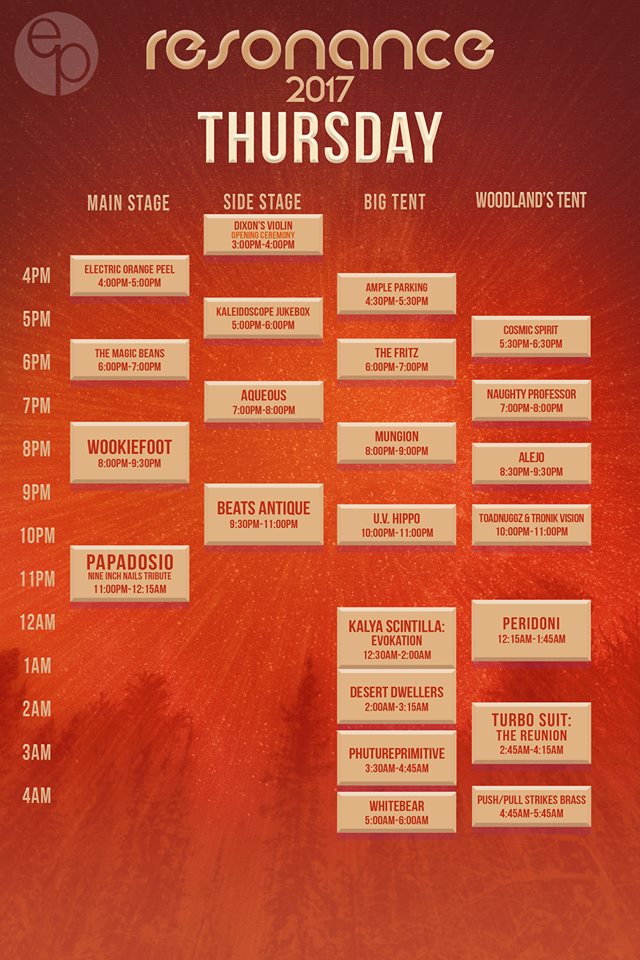 Resonance has also become the premier stomping grounds for fans of Papadosio. Ever since the group parted ways with Rootwire, it has become the only place where you can see the band perform three nights in a row. Last year, fans from all over the country ascended on the beautiful festivals grounds to witness their favorite band perform three incredible sets, and this year is about to be even better. On Thursday, we’ll see the band performing a tribute to Nine Inch Nails. This may seem out of the ordinary for a band that performs a more delicate sound compared to Trent Reznor’s industrial onslaught, but we can be certain that synthesizer assault of Sam and Billy Brouse will create something nothing short of spectacular. Along with two normal sets both Friday and Saturday, they’ll also be performing an extremely rare acoustic set on Saturday.

Atlanta, Georgia livetronica juggernauts STS9 will be making their Resonance debut, along with their second performance at Legend Valley in two years. Their performance last year was plagued with both power issues as well as a random girl climbing on stage and falling on drummer Zach Velmer, so hopefully this appearance will be smooth sailing. The quintet has been crushing the festival circuit this year, so we can expect a powerful headlining set on Friday night.

Bringing their amazing world music fusion to the side stage on Thursday will be Beats Antique. It’ll be the third performance on their “Shadowbox Tour,” so Resonance attendees will be some of the first to hear and see what these amazing sound and visual performers have been cooking up for this new tour. Attendees will also be in for a real treat when ambient electronic producer Amon Tobin performs under his Two Fingers alias. Not only has the Brazilian artist not been touring much recently, but also his grimier and heavier Two Fingers act has been shelved for quite a bit. 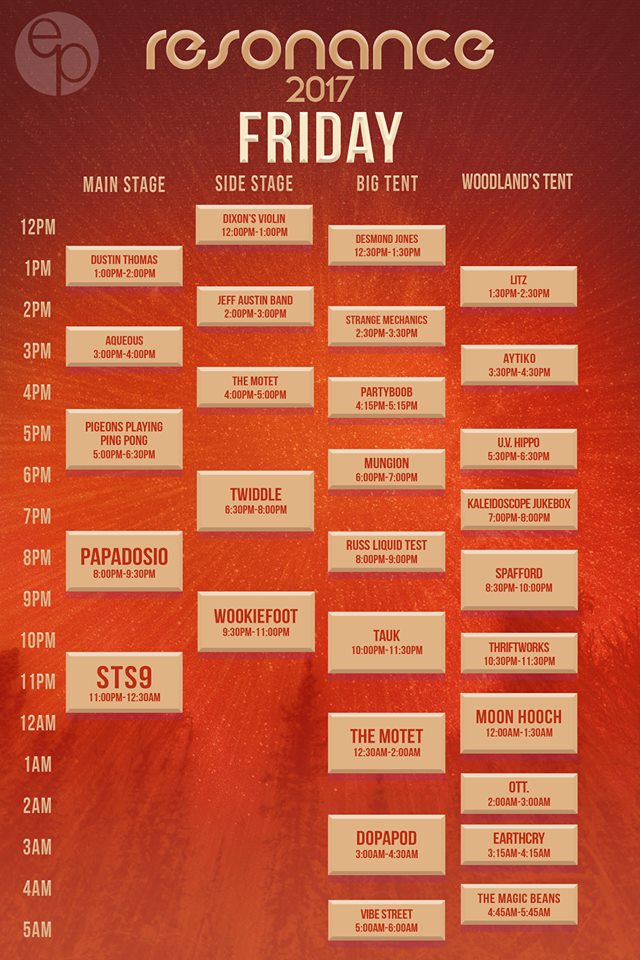 Also at the top of the bill are a variety of bluegrass, folk, and world music acts for the kind of people that like their music a bit more organic and light. Progressive bluegrass favorites Yonder Mountain String Band will be bringing their Colorado twang to the side stage early Saturday night, along with two sets from Keller Williams. Williams will be performing an early evening solo set on the main stage on Saturday, along with a Keller and His Compadres late night set, which will feature Kyle Hollingsworth of The String Cheese Incident, and Dave Watts and Garrett Sayers from The Motet.

Resonance attendees will also be getting their rootsy reggae fix from South Carolina’s Trevor Hall, who is making his second Resonance appearance in a row. His soothing voice and uplifting voice will be perfect for his early Saturday set on the main stage. Minnesota based traveling jam circus Wookiefoot will also be making their second appearance in a row as well. They really brought the crowd out for their two stellar performances last year, and it’s pretty obvious that it will be the exact same this year both Friday and Saturday night.

Festival goers that love themselves some jam bands will be surely be getting their fix at Resonance this year. Resonance will provide a great mixture of new jam staples along with a few rising favorites during the three day festival. Jam lovers will be happy to get the chance to see multiple sets from the likes of Pigeons Playing Ping Pong, Aqueous, TAUK, Spafford, The Magic Beans, and Mungion. Legend Valley staples Dopapod and Twiddle will both be performing on Friday, but since they are both only playing one set apiece, we can be sure to expect heaters from the both of them. 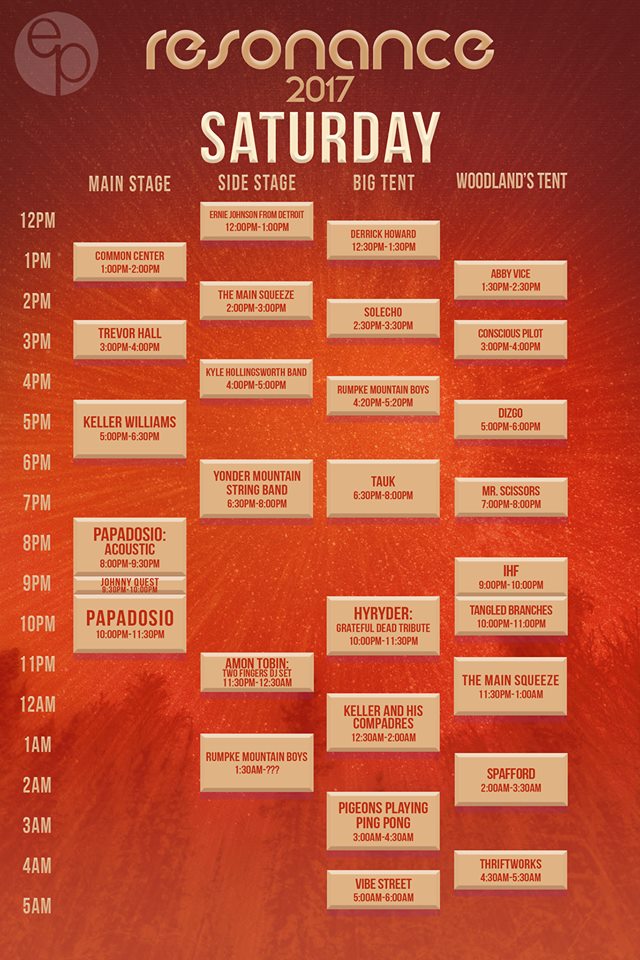 Bringing the funk to Resonance this year will be The Motet, performing two sets on Friday. Along with a late afternoon side stage performance, they’ll also be kicking off the late night in the Big Tent. One set will feature original music from the band, while the other will be one of their “Mixtape” sets, featuring music from 1979. I’m not trying to make any concrete predictions right now, but I’m pretty positive a few of these songs will be featured: “We Are Family” by Sister Sledge, “Ring My Bell” by Anita Ward, Chic’s “Good Time,” Kool & The Gang’s “Ladies Night,” and “Boogie Wonderland” by Earth, Wind & Fire.

Resonance is always known for bringing some of the best in psychedelic and downtempo electronic music. Thursday will be without a doubt the best night for this, with back to back to back appearances in the Big Tent from friends of The Untz Kalya Scintilla, Desert Dwellers, and Phutureprimitive. Friday will also feature returns from both Ott. and EarthCry, both performing late night at the Woodlands Productions stage.

It also isn’t a music festival without a couple tribute sets. Hyryder will be giving Resonance attendees their Grateful Dead fix on Saturday night, while The Magic Beans will perform tunes from Talking Heads for one of their sets, while Ultraviolet Hippopotamus will be showcasing some Beck tunes for one of their dual performances.

If you can see as many sets as possible, that’s awesome. Hopefully your legs won’t be as sore as mine will. If you can only make several, here are a 10 acts that you definitely need to make sure to see.

Much to the happiness of many Ohio attendees, Cincinnati’s Peridoni is back for yet another Resonance appearance. The jamtronica quartet always draws an immense crowd at Ohio festivals not only due to their regional status, but also because of their excellent progressive sounds. While they usually perform multiple sets throughout the weekend, attendees will only be able to catch them Thursday night at the Woodlands Tent. If you like to get down to some electronic based jams, make sure to witness one of the next big things to come out of Ohio.

After calling it quits last year, Indianapolis based livetronica trio Turbo Suit is rising from the ashes to bring their party to Resonance. Combining electronic, funk and disco, the group has surely been missed on the festival circuit this past year, which is all the more reason to come out and see their Thursday late night set at the Woodlands Stage. Saxophonist Nicholas Gerlach is also the festival’s Artist at Large, and it’s widely known that he always adds excellence to every one of his sit ins.

Keeping the small yet stellar Bluegrass presence known at Resonance will be Cincinnati’s Rumpke Mountain Boys. Whether it is during the day or during the late night, these Ohio favorites always know how to keep a crowd dancing with their rootsy grooves. The band has seen tremendous success this past year, performing all across the nation and sharing stages and lineups with the likes of the Jeff Austin Band, Railroad Earth and Dark Star Orchestra. If you’re down for some Thrashgrass, catch them performing during the afternoon and late night on Saturday!