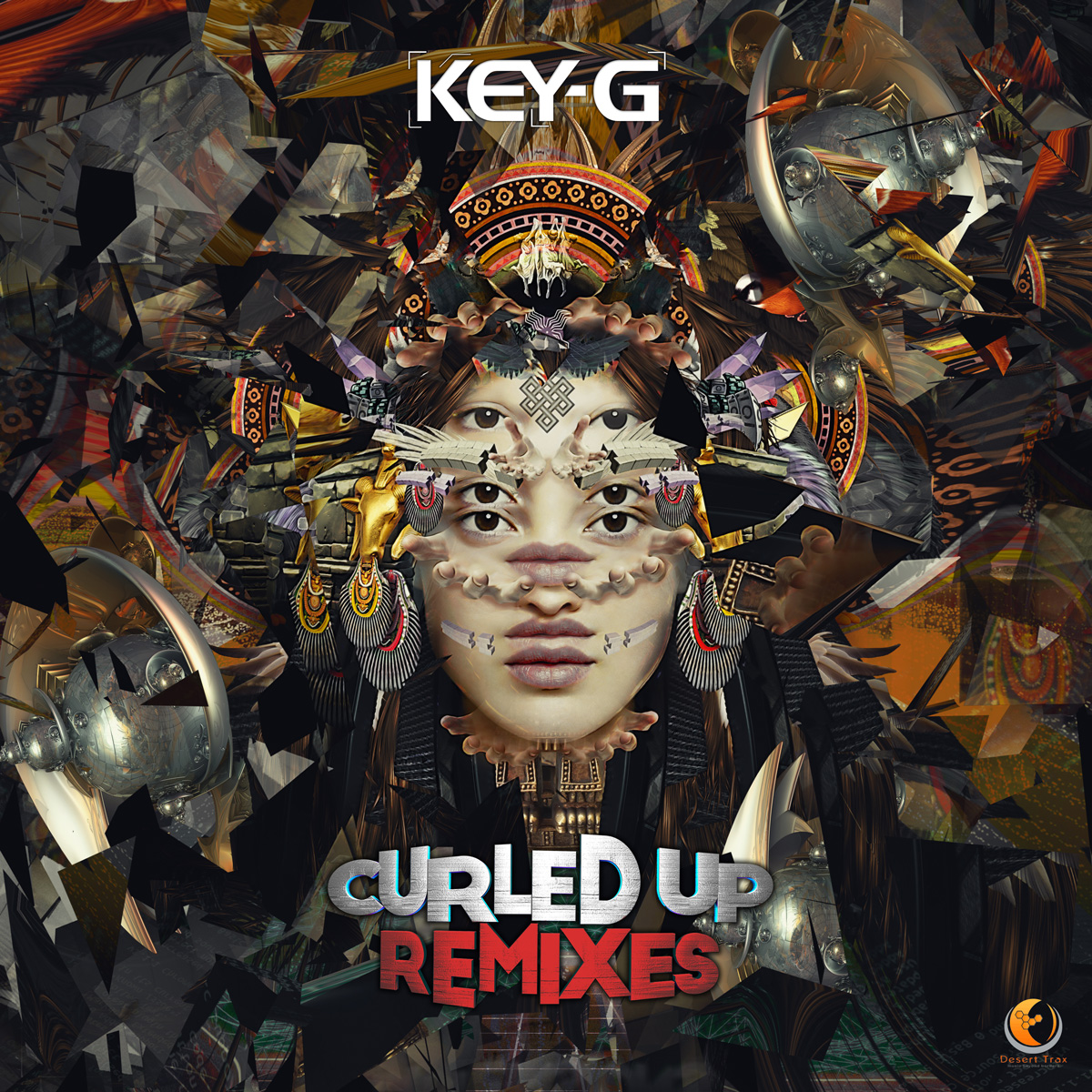 Late last year, Key-G returned to Desert Trax with his Curled Up Dimensions EP. This summer, Desert Dwellers' label assembles some of the best rising stars and established veterans in the psybreaks and psydub realms for a jam-packed remix collection.

Standouts from this new remix EP include a sprawling 11-minute journey from UK legend Globular on “Unleashing the Forces.” Instead of slowing things down like they did for their new duo project, Jakare, Halfred and Lo.Renzo return to their midtempo psy roots with remixes of “Quantum Strikes” and “Ascension Upgrade,” respectively. Newcomer Johny Pablo impresses with the “Pinpricks of Light” remix, and Key-G takes on his own “Third Eye Girl” to close out the set.

Curled Up Remixes is out July 26th on Desert Trax.

Among the seemingly endless styles of electronic music permeating the globe today, psydub remains one of the oldest and most iconic. Bridging the classic rhythms of organic dub and reggae with the warped, twisted, and spaced-out sounds of the information age, psychedelic dub is a fusion-genre that draws upon the earliest forms of modern electronic music and the ever-expanding world of sound system culture.

With roots dating back to the 60s, when Jamaican dub pioneers first discovered a passion for dismantling and reshaping reggae recordings with loops, samples, and studio effects, psydub is the hyper-modern extension of classic dub and the culture of remixing that is woven so deeply into its sonic identity. Perpetually in flux with the ebb and flow of the times, its history is laced with seminal releases from the likes of The Orb, Shpongle, Ott, and an ever-expanding array of musical mystics from the global downtempo, ambient, and psytrance scenes. With emerging artists each year pushing the genre into increasingly complex and experimental frontiers, it has proven itself as timeless and relevant as any other style of music, yet remains curiously absent from the genre-prone vernacular of modern electronica. 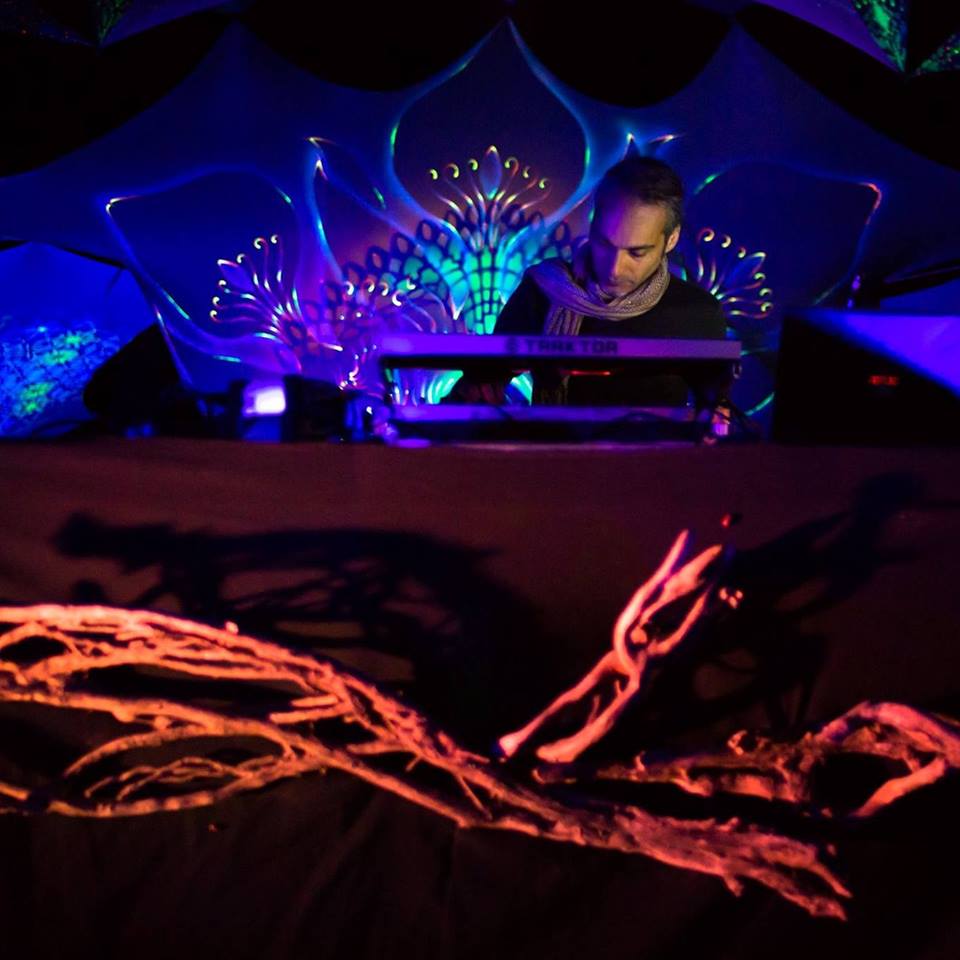 Key-G is one such artist leading this expedition into the fringes of modern dub music. Born of the European psychill scene, he has released two collections in as many years on Desert Dwellers’ style-bridging electronic label, Desert Trax, and quickly found a home amongst some of the most influential artists in the global psychedelic scene. With a luscious take on the uplifting rhythms and grooves of psydub in his debut album, Omens & Artifacts, and a darker and more technical exploration of psybass in his 2018 release, Curled Up Dimensions, Key-G’s blend of classic dub themes with global bass offers a lens into the gravitational tendency of psychedelic music to merge rather than divide styles, sounds, and genres as a whole.

As if to drive that point home, 2019 brings another chapter to the Key-G’s story with Curled Up Remixes — a sprawling journey into the very heart and soul of global music culture. Dancing across tempos and styles, the album’s jam-packed lineup includes contributions from psydub visionary Globular, mid-tempo wizard Halfred, experimental dub producer Gumi, Lo.Renzo, Johny Pablo, Advanced Suite, Earth Connect, and Geoglyph.

Our premiere track by Globular, “Unleashing the Forces,” oozes with pure psychedelic essence in what stands out as one of the most dynamic entries in the collection. Drawing us in with nearly four minutes of hypnotic instrumentation and deep tribal chanting, the song breaks into a kaleidoscopic montage of dubby basslines and churning synthetics overlaid with digital melodies and samples that showcase Globular’s celebrated command of atmospheric sound design.

While staying true to the album’s psydub leanings, the overarching theme of the collection is one of innovation and exploration that tickles our sense of familiarity and comfort while bringing new dimension and definition to the source material. Hitting everything from stompy midtempo and tribal bass to ethereal tech breaks and psybient-style voyages, Curled Up Remixes will surely find its way into the hands of audiophiles with their finger on the pulse of the global bass and trance scenes.

A vivid snapshot of where psychedelic dub and bass music stand in 2019—melodic and mysterious, yet delving into increasingly heavy musical spaces—this remix album is an essential entry into the libraries of dance floor mystics who, year after year, find themselves dancing in front of monolithic speaker stacks in venues and at festivals around the world, celebrating the tribal ritual of dance and the art of meditation through movement.

With a half century of history feeding its propensity for flux and re-invention, psydub continues to reveal its influence on electronic music through producers like Key-G and the numerous producers who appear on Curled Up Remixes. It is rare to see a remix collection drawn from one source deliver so many different versions of itself, and to those watching the global electronica narrative unfold, such musical selections are likely to present themselves on dance floors for years and years to come.