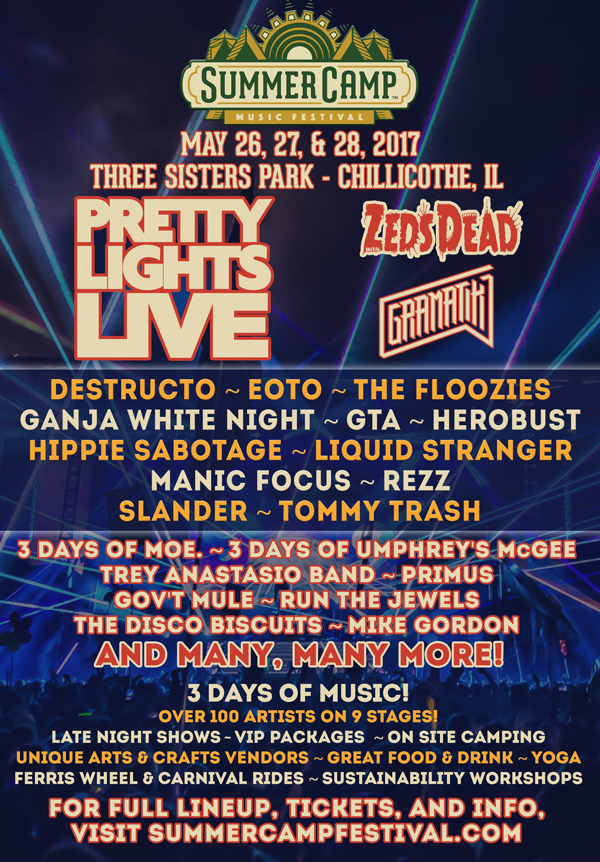 Summer Camp Music Festival will always be a bastion of jam, folk, and Americana. In its nearly two-decade history, the annual blowout event in central Illinois garners some of the biggest acts around in the festival community, as well as surprises like Willie Nelson, Tom Petty's old band Mudcrutch, and Huey Lewis & the News.

Perennial headliners moe. and Umphrey's McGee are always going to reign supreme over the rest of the lineup. But they're tested for supremacy this year with acts like Trey Anastasio and Primus (two-thirds of Oysterhead... hmmm... what's Stewart Copeland doing this weekend?). But the big focus for us, obviously, is the sheer amount of incredible electronic music acts who are taking the stage at this year's festival.

Over Memorial Day Weekend, that's May 26-28, some jaw-dropping names and huge megastars will descend on Chillicothe, Illinois just north of Peoria at Three Sisters Park.

The big news that everyone is talking about is the SCamp debut of Pretty Lights Live. The incredible assemblage of artists Derek Vincent Smith is bringing to Summer Camp is staggering. These are artists with funk, jazz, and jam backgrounds chugging out experimental fugues and thick breaks on the Pretty Lights catalog.

Fellow livetronica acts include Gramatik, EOTO, and The Floozies. It's an all-out EDM assault when ZEDS Dead, Tommy Trash, Slander, and Herobust join the party, and the list goes on with favorites like REZZ, Manic Focus, and Desert Dwellers.

Tickets are still available at summercampfestival.com and there are multiple VIP levels and all sorts of add-ons and packages. Don't forget about the fun workshops in the Church and all sorts of great vendors and sustainability panels. There are more than 100 artists performing on 9 stages, so there is absolutely something for everyone.

Euphoria does something different with its 2017 lineup.