The Wobble Women series is back with more incredible women kicking ass behind the scenes in the bass music industry. If you have a suggestion of who we should profile next, please drop us a line at support@theuntz.com or post them up in The Untztoppable Facebook group. 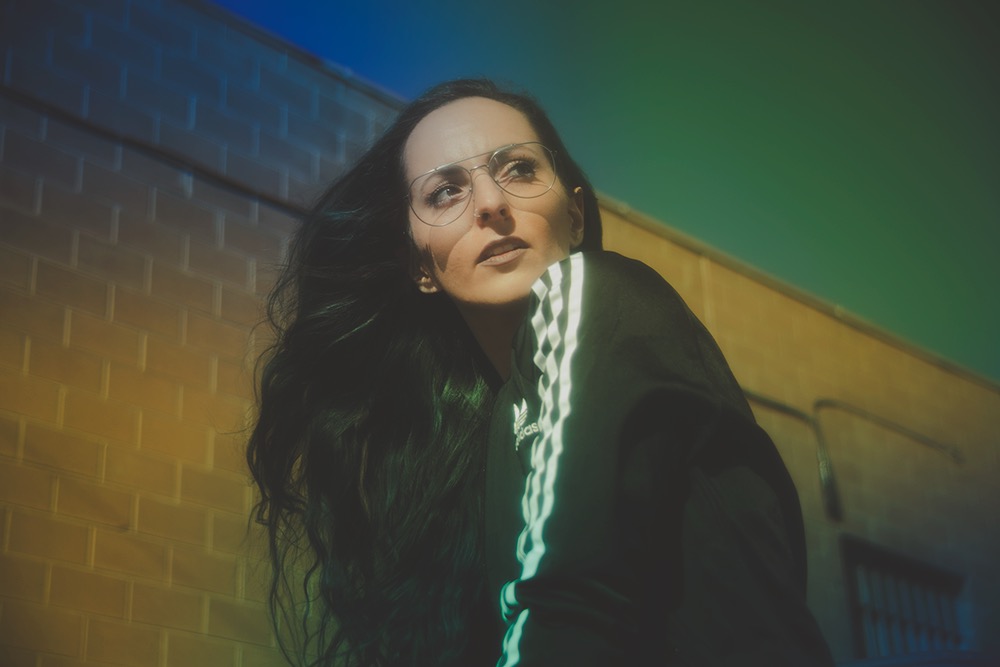 Ally Grimm better known by her moniker, A.L. Grime, is not your average 27-year-old boss babe. Born in Venezuala and raised in D.C., She is the co-founder, creative director, and an agent at The Gradient Perspective and its flagship record label.

Additionally, Grimm is booking manager for Thought Process and Scarien, and live art coordinator for BADVSS Entertainment and the Bass Network. If that wasn’t enough, Grimm actively pursues a lively visionary art and music career as A.L. Grime. Grimm is on her way to be a multimedia mogul—an obvious choice to be a role model to younger and older women alike.

Grimm is very involved in the local arts scene in her new home base of Denver, Colorado. As she explains, “I'm working on a mural at The Black Box in Denver, I was just added as an art coordinator for Solasta Festival, I’m launching my first clothing line this Fall, and I’m launching a radio show at the end of this month with some friends.” These hints have us salivating.

Grimm “paid her dues” when she first broke into the music business, taking an unglamorous role running the box office and a promotions team for a small venue in West Virginia.

Grimm’s tough female boss from this small venue gave her great advice, “When you have a Rolodex of haters, just know you’re doing it right.”

“This has been my mantra since that day,” Grimm said, “Anytime I feel disrespected or undervalued because of my gender, I remember my own strength. Anytime I feel sexualized by people that I work with, I remember my value. And anytime someone second guesses me in a project, I keep my head down and kick some serious ass. We are our own best cheerleaders. And anyone who isn’t cheering for you, is only proof that you’re doing something they wish they could do.”

Additionally Grimm went through her own personal darkness and struggle that led to her career now. 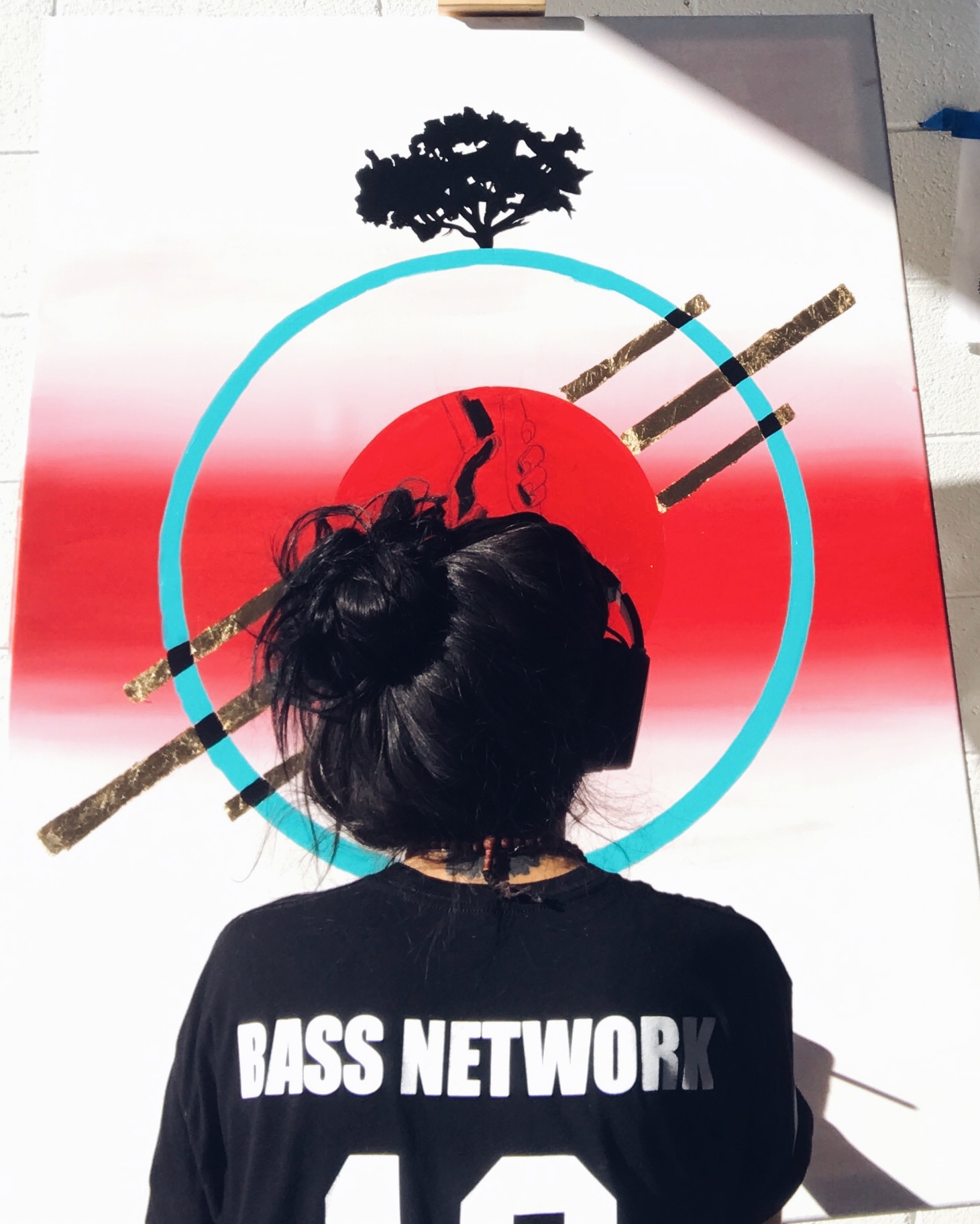 “When I first started painting two-and-a-half years ago,” Grimm explained, “I was in one of the darkest times in my life. I had dropped out of school, freshly completed a detox/mental health stay in a hospital, and was realizing that I had pretty much no one standing behind me to support me. Incredibly defeated and feeling hopeless and lost, I turned to a canvas and released years of pent up negative energy in one sitting. When I look back on everything I have been able to do in the last two-and-a-half years, I am overcome with awe and filled with a hunger for more. The girl that sat in front of that first canvas didn’t believe in herself. That girl didn’t have a dream or goals because honestly that girl didn’t feel she had a lot to live for.”

From time to time even such an accomplished woman like Grimm has self doubt, which I think we all can relate to, whatever stage of life we’re in. Grimm says, “Now, in my darkest moments, I catch myself talking to that girl often. I still have a voice in the back of my mind that tells me that I’m not good enough, or strong enough, or cool enough to succeed. But now, I have two-and-a-half years of experiences that prove that voice wrong and that serve as reminders for what you can achieve if you just keep pushing. The thought of my potential success and the potential growth of this community is what gets me out of bed every day and helps me crush through resistance.” 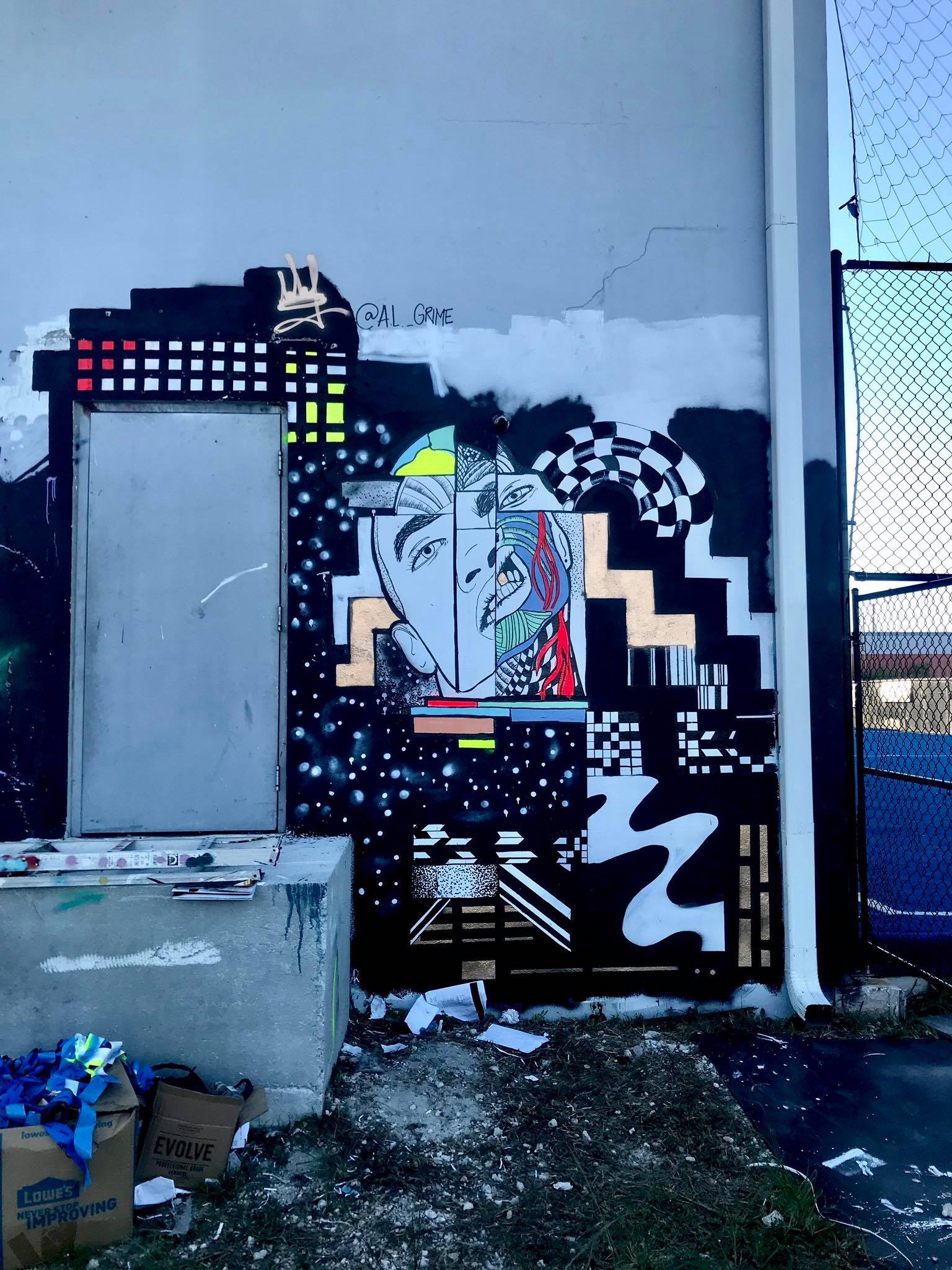 Some of A.L. Grime’s most memorable moments include getting to create two murals at Art Basel right in Wynwood this past December, running the first full The Gradient Perspective stage with over 60 musicians, an art gallery, mural maze, and a full lineup of workshops, becoming a member of the Bass Network team as the Art Coordinator and assisting with special ops during events, being featured as the very first Artist of the Month in Tipper Art led by Liza Schultz, and having her first solo art show in female owned and operated Spectra Art Space.

“My biggest piece of advice, although I usually say this to people privately, don’t sell yourself short in your climb,” explained Grimm, adding,” While I celebrate self expression, I see way too many girls who feel pressured to use their sexuality to climb without realizing how it is hurting them—personally and professionally.”

In 2019 Grimm says that women don’t need a man to get to the top of her career, “We have moved beyond an era where women are forced to be used as objects. Use your mind and your talents to rise to the top because they are what make you authentic, unique, and powerful.”

Grimm is “incredibly inspired by music, which is why I have chosen to pursue a position in the industry alongside my art career. I am moved by sounds that can pull emotions out of me that I didn’t even know were there. I tend to like more chill sounds to create and work to like CharlestheFirst, Koan Sound, Asa, Thought Process, and, my favorite, the entire Soulection collection.”

Grimm’s favorite place to paint is at home, adding “I am a serious homebody and I have a ritual that I perform to get my head in the game so I do my best when I am able to create my perfect sanctuary before getting creative.”

More she advice from A.L. Grime: “Join women’s collectives and creative clubs! Surrounding yourself with empowered feminine energy will help you become confident and feel like the goddess you truly are! Read the book The Subtle Art of Not Giving a Fuck. It will change your life.”

Grimm has many upcoming projects. Through The Gradient Perspective, “we have so many incredible things coming up on our agenda. We will be hosting the workshops at The Untz Festival this summer and a main stage takeover with some of our brightest musicians. We will also be hosting a stage at Big Dub Festival again this year as well as some more takeovers at some festivals we can’t name just yet. I will also be launching a new radio show project with some very talented partners in the coming months which will tease some of my long term projects for TGP. We will also be taking part in tons of events around the country showcasing art, music, and education,” said Grimm.

Additionally, “On a personal level, I will be taking on a couple of larger mural projects this spring which I can’t name just yet. I will be leading the Live Artists at the Bassnectar events all year as well as at Big Dub Festival and a couple other major events as well. I look forward to working with the two musicians I manage as well (Thought Process and Scarien) to help them grow and to get their message heard from coast to coast,” Grimm added.

One last piece of advice: “I once opened a fortune cookie that read, “Life is not a Struggle. It’s a Wiggle.” When things look dark, remember that you can’t be stopped if you just keep moving,” exclaimed Grimm.

More inspirational food for thought from Grimm? Look no further:

“One of the things that I think discourages a lot of women from entering the business is that they feel helpless against the masculine machine of the entertainment industry. I feel this really often, and it is a feeling that I have to remind myself not to overpower me.”

“It can be really confusing being in this industry sometimes. As a woman you can't be too loud or you're a bitch, too quiet or you're weak. You can't dress provocatively or you're easy but you also can't look sloppy or a lot of males in the industry won't take you seriously. You have to be polite without stepping over the very fine line that could be confused for flirting and if you do flirt but don't follow through with more you get blacklisted for being a tease. It can often feel like we can't win and to many girls that can be too overwhelming to step into the industry. It can be even works for survivors of abuse and assault. They are facing triggers at every turn but have to remain silent for fear of coming across as damaged or weak.”

Grimm said, “In moments where we feel like we can't fight the system, it is important that we turn to each other to create a system of love, respect, and support so that we can rise up into roles that allow us to bring real change to the scene as a whole. Show love to the other women our here on their grind. Connect with them, share your experiences and your dreams with them. Look to your sisters in sound. We can bring a positive change to this scene by standing strong together, individually pushing our unique artistic visions, and uniting in the pursuit of building a positive, sustainable music community.”