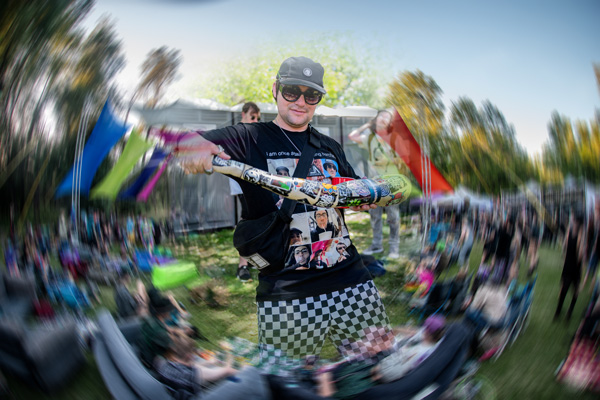 I don't know why I have to give Chef Boyarbeatz any more press. He's already got the entire upper echelon of the underground bass community velcroed to his ass. There is a conversation happening in green rooms across North America every night: “OK, which Chef dub are you dropping? Can I get ______ tonight?”

With one fell swoop on July 29th, a giant tranche of dubplates get ethered when Deep, Dark & Dangerous put out Joey Koppenheffer's The Power of Sound EP. This four-track EP carries the notorious “Steady Slurkin'” which Ternion Sound famously blended into out of “Night” during their latest DEF set which resulted in the entire city of Atlanta sinking five and a half feet lower under the crushing weight of the ruckus. The fact that Joey's even getting dropped in the same breath as Coki & Benga tells you everything you need to know about where his career is heading.

Today, I get my marinara-stained paws on “Cruise Control,” a decidedly evil tune with the same sort of deliberate recklessness that has gotten Koppenheffer major credit from fans and a bevy of co-signs from the most tasteful DJs in our corner of the industry. Not to mention unearthed one of my precious surprise guest slots at The Untz Festival. He'll act like he was doing me a favor, but... well yeah, he was. That was rad. And our fans ate that shit up.

Again, this is gilding the lily; Chef Boyarbeatz doesn't need any additional press. The EPs going to smash, the horchata will flow, and this kid's going to be on every lineup from coast-to-coast by the end of this sentence.

Pre-order The Power of Sound from DDD