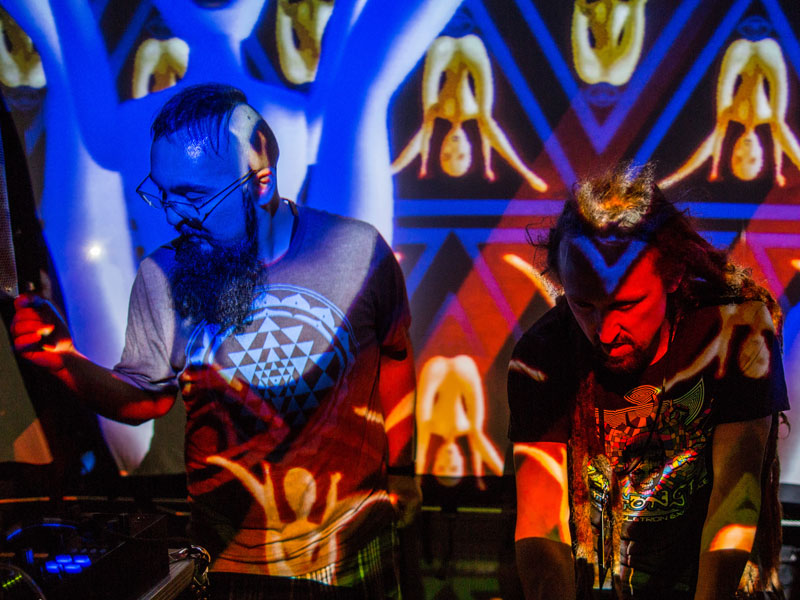 Forget what you thought you knew about psychedelic electronic music. Let me see your Inner G.

Zebbler Encanti Experience’s new album, takes the listener on a genre-melding adventure that features psytrance builds breaking down to mind-melting drops of a minimal dubstep-trap hybrid. In the past few years, this duo has been making a name for itself by delivering an intricate level of sound design combined with custom visuals that aren't simply knocking socks off, they're blasting them straight through the soles of steel-toed boots. We had the pleasure of picking the brains of these creative dudes, Peter 'Zebbler' Berdovsky and Ben 'Encanti' Cantil, to determine what inspires them and what they plan to achieve with not only the Zebbler Encanti Experience, but this new release, in particular.

But before we get to the interview, let's crack open a brand new single from ZEE, featuring fellow Bostonian Nuno Cabral, a.k.a. Ninesense, to see just what happens when psytrance runs headlong into neck-snappin', knee-crackin' trap. (Here's a hint: "Insource" is about to blow your speakers wide open.)

The Untz: You both had pretty illustrious careers going behind the scenes in the electronic music space, crafting visuals for EOTO and Shpongle—what made you decide to go your own way with Zebbler Encanti Experience?

Zebbler: I’ve always wanted to express myself freely, without restraint. This project gives me a chance to be unrestrained in my visual psychedelia, visiting every squirmy and nuanced emotional moment in the matrix of our existence. Encanti’s sound design is very compatible with my world, as well. I feel like we occupy the same brain space sometimes. We are mining gold in the same audio-visual spectrum mine. Being a part of ZEE allows me to be me.

The Untz: With such intricate sound designs and live sessions of your work on Ableton, describe your creative process and how it plays into the experience.

Encanti: For me, I am in love with the creative process: the spark of creativity, thinking outside the box, and exploring new concepts in sound construction. Teaching sound design and composition also helps me come up with many ideas, which is why I am grateful for being able to teach as an Assistant Professor at Berklee Valencia. Sometimes I begin with a wild sound and then build the entire track around it. Other times, I think about what Zebbler’s doing, and I try to make sounds that would be good compliments for visual events. I try to make main sounds very three-dimensional so they translate well in to video, like you’re seeing through a window when the ZEEggurat lights up. 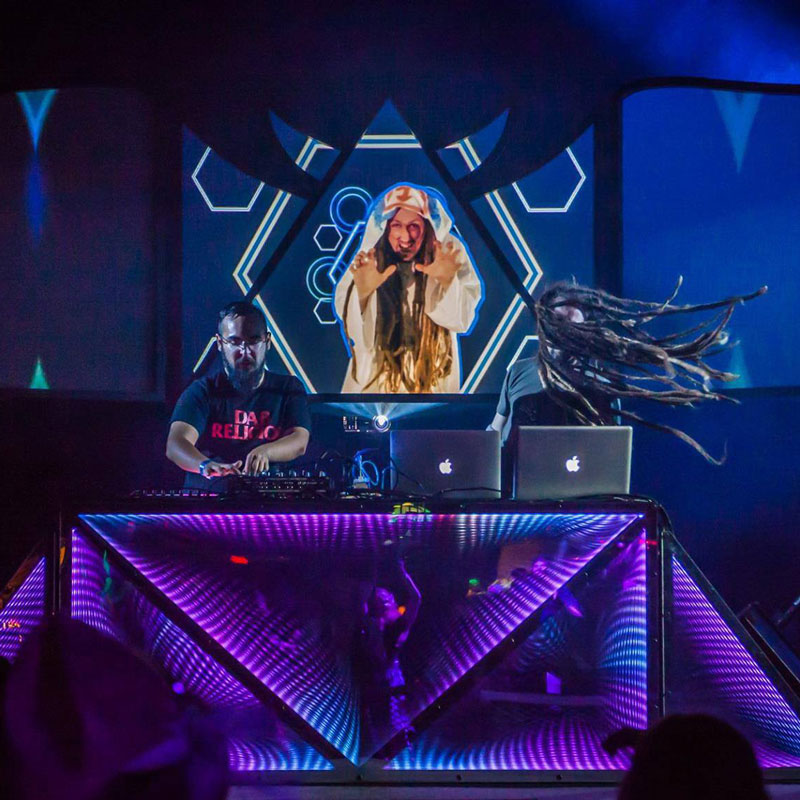 The Untz: What inspired you to pursue the visual arts and what would you say the future holds for visual productions at shows? Or what would you like to see?

Zebbler: In my dreams, and through various forms of meditation, I have experienced some visions that were incredibly amazing, shocking me to the core with both their beauty and their ability to unravel my mind into bits. Ever since then, I’ve been simply trying to recreate that flavor, and share it with others.

As far as what the future holds for A/V art: technology is ever faster, ever smarter. [We're seeing] more automation, more self-awareness on the side of our software and apps. Bigger and bigger chunks of our reality are now re-creatable in digital forms. Multimedia art is going to get very weird in how immersive the new instruments of the future artist and performer may be.

The Untz: Who or what are your main musical influences?

Encanti: At the moment I am listening to everything on Kannibalen, Play Me, Never Say Die, OWSLA, Firepower, Saturate, Adapted, and Gravitas Recordings. I am also hugely inspired by the sound design of Woulg, Flint Kids, Halfred, Shwex, Rob Clouth, and everything on the now-defunct label Enig’matik Records. Tipper also is always a big inspiration for me in every regard.

Outside of the studio listening environment, a lot of my interest in psychedelic music was influenced by Shpongle (Simon Posford and Raja Ram) and all the music on their record labels Twisted and Tip, as well as touring with EOTO (Michael Travis and Jason Hann), which exposed me to a lot of ideas about how the flow of festival and progressive jam music should sound like.

The Untz: What should we be expecting from the December release of the Inner G album?

Encanti: Expect an album that lives up to its name! This album is very high energy, full of deep psychedelic moments spliced with big filthy bass drops.

Continuing on from the Freakquency EP, I am still chasing the idea of PsyTrap, a sound inspired by psychedelic trance mixed with crunk beats. This concept is infectious to me: journeys that are mind-expansive and entrancing, broken apart and mixed up with dirty American bass music. It’s a sound you might hear accidentally if you’re walking between a psy set and a bass music set at a festival somewhere. The two seem like natural bedmates, not just from a musical standpoint, but from a design aesthetic, as well -- I am highly amused by the image of cruising into a deep cosmic wormhole of trance, only to land smack in the middle of a sweaty ridiculous twerk off! I am making this kind of stuff because I wish it existed. “Psy” music and bass music already have their own place mainstream American consciousness, but this album is all about exploring their relationship.

Beyond the genre-bending, the overarching binding force between all of these tracks is a lot of really wild sound design and a nice variety of multicultural instrumentation to compliment all of the synthetic sounds. This is the most amount of collaborations I’ve had on one record. The tunes I made with POCKiTZ and Ananaki are some of the best tracks on here, and I am also in love with the sounds that Olivia Dawn and Ninesense brought to their songs. Most of all, I am particularly excited about people hearing the opening track with vocal harmonies by Ganavya - her voice gives me goosebumps whenever she sings, and I think her parts really set the tone for the whole record.

The Untz: If you could change or augment one aspect of the electronic music industry/scene, what would it be?

Encanti: Whenever I glance at Pop EDM, I see a lot of misogyny and cliches. I’m looking forward to an electronic music renaissance when dance music goes through a similar thing that alternative rock went through in the 90’s -- a novel wave of emotional and conceptual depth, on a widely accessible scale. I think this will probably happen naturally as electronic music matures more as a popular artform.

I’d also like to see more opportunities for young people, especially for young women and minorities, to get involved in making electronic music. I applaud companies that have initiatives to help make music production training more accessible - companies like Ableton for giving refurbished Push units to music education projects for young people. The future of our artform rests on the next generation of artists getting their hands on the tools, so I think everyone inside the industry should consider it a responsibility to enable others to make music.

The Untz: If your musical journey had a goal, what is it and have you achieved it yet?

Encanti: I think the ultimate goal is just to make great music and put it in front of people who appreciate it, and repeat the cycle without going broke. Hopefully people will really dig this new album and there will be even twice as much excitement over the next one. There really is no master goal other than to just keep going forward and eventually to “make it” -- which, by Zebbler’s definition, is when you can retire in Las Vegas just doing covers of your own tunes.

Other than the jawdropping preview of a collab with Mr Bill, what else should the universe be expecting from the Zebbler Encanti Experience in the near future?

Zebbler: I am currently working on several new music videos for some of the tracks from Inner G. They will be released throughout this winter - so keep tuned for the latest weird bits of delirious and delicious visual morsels.

Encanti: In the next few months I’m planning to do more collaborations with Ananaki. I also really love working with POCKiTZ, and singers Ganavya and Maviiin, so I think we’ll all be working together again. In the end, I just really love making ZEE records (compared to making singles), and even though we just wrapped up Inner G I am already gathering ideas for the next release, so we’re not slowing down any time soon. One thing that’s for sure is that we will be taking the ZEEggurate projection mapped stage on tour again 2016 and there will be lots of new tunes and new visual third-eye-candy.

The creative nirvana of the Zebbler Encanti Experience is a refreshing addition to an industry where ghost-producing and a general lack of production knowledge runs rampant. Instead of copying other styles or stealing from other artists, these two are pioneering their own creative passions by implementing specific elements of their favorite genres to create an experience like no other. Be sure to look out for Inner G on December 1 from Gravitas Recordings. 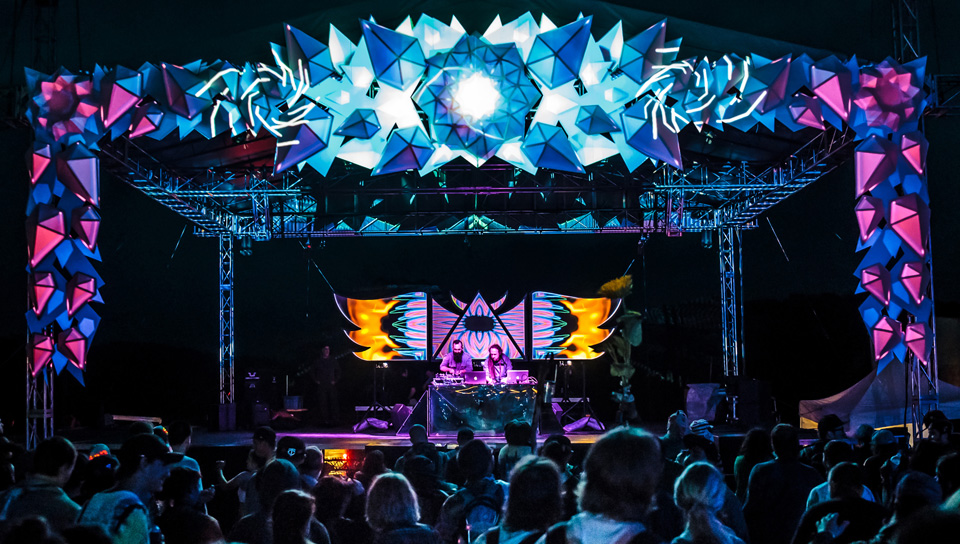 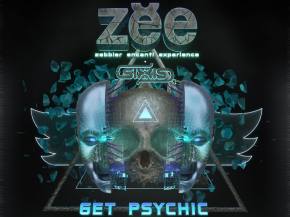