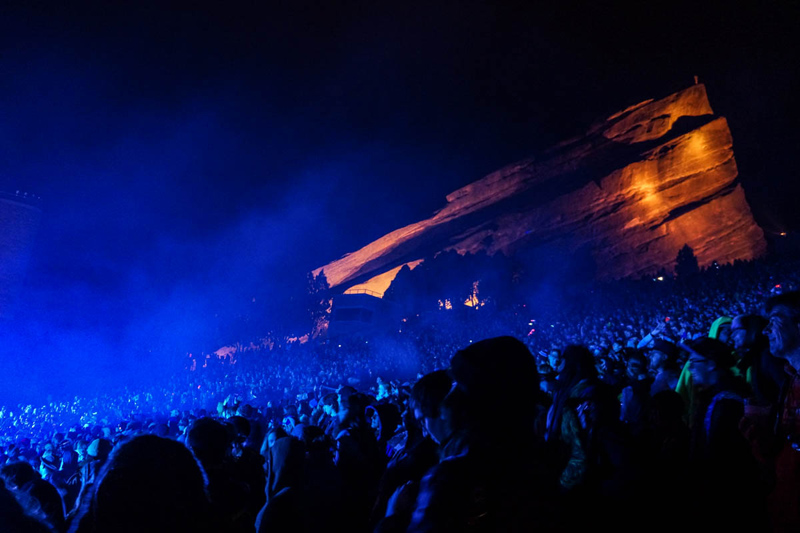 Come on, don’t ruin this for me.

My inner monologue, fraught with worry, began to corrode the sense of elation I’d been feeling all week. What had started off as a beautiful cobalt-skied morning had slowly turned into a gloomy grey mess. The Colorado heavens clenched its cloudy fist, choking out the last remnants of blue stratosphere. The rain threatened to erupt at any moment. With a cold dampness rapidly approaching, my friends and I barreled along Highway 93 towards Red Rocks Amphitheatre. Upon arrival, I found that my fellow attendees seemed not share to my sense of dramatic desperation. Despite a light sprinkling, the air sizzled with anticipation. After all, this was the only Shpongle show in the U.S. all year with the full live band and all of its accompanying performers! No cold drizzle was going to put a damper on these festivities.

For months, May 10 towered over my calendar like a golden monument, and now I stood humbled at its glistening base —Shpongle on the Rocks was finally here. As a former Seattle resident who moved to Denver in early April, I had been salivating over the prospect of a Red Rocks show ever since I first saw a photo of the legendary venue and its expansive view (you can see the Denver skyline from most of the seats). No amount of HD footage can do the Rocks justice. You’re surrounded by massive red sandstone formations that leap out of the earth. To the left of the amphitheatre (if you're facing the stage), a chunk of sandstone that looks like a piece of red velvet layer cake dwarfs everything in sight and provides a perfect medium for reflecting resonance. It appears as if the gods forged this site for one reason — live music. 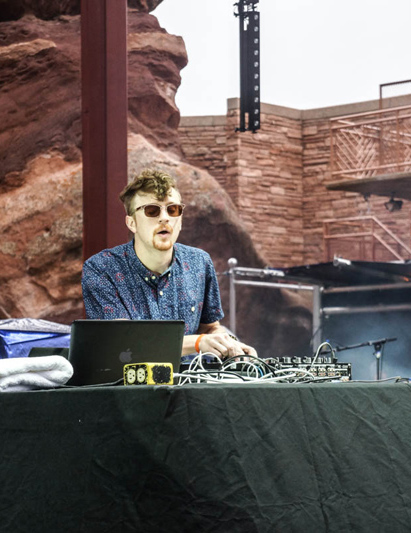 Backed by openers Emancipator and Minnesota, the Shpongle band came together to create a musical and visual spectacle unlike any other. These three acts have sculpted their own distinct styles and yet managed to remain compatible. Three acts that unified the sold out Red Rocks crowd in hypnotic harmony.

Our adventure began with a seismic punch to the gut as Christian Bauhofer aka Minnesota (I overheard someone saying, “Minnesota, huh? So that explains the short sleeved shirt in this weather”) crafted us a bass-heavy fusion of uplifting melodic tunes and hip-hop classics.

He played his songs “To The Floor” and “Stardust Redux” as well as throwbacks from Biggie and Wu-Tang. He opened his set with a Capital Cities cover of Pink Floyd’s “Breathe” that used Tupac’s vocals from “Smile.” He sprinkled in some Flume, his “California Dreamin’” remix and a mashup of Dorrough’s “Ice Cream Paint Job”and Radiohead’s “Everything In It’s Right Place.” Somehow, despite incorporating rap samples about shaking your ass into his songs, Minnesota’s music somehow manages to retain an element of class. His sets are equal parts lush, playful, and gangster.

As he fired these sonic rockets out of Red Rocks’ titanic speakers, the bass rattled our internal organs. But something else moved me as I watched Christian manipulate his CDJs. The day before the show, he tweeted: “god damn, been really good this past month but missing my lil brother so fucking much tonight, this shit hurts. love you @conconwontonn.” After a brief moment of confusion, I remembered hearing about how he recently lost his brother to cancer. Despite the emotional battle he was waging internally, Bauhofer maintained his cool and laid the foundation for a wonderful evening. 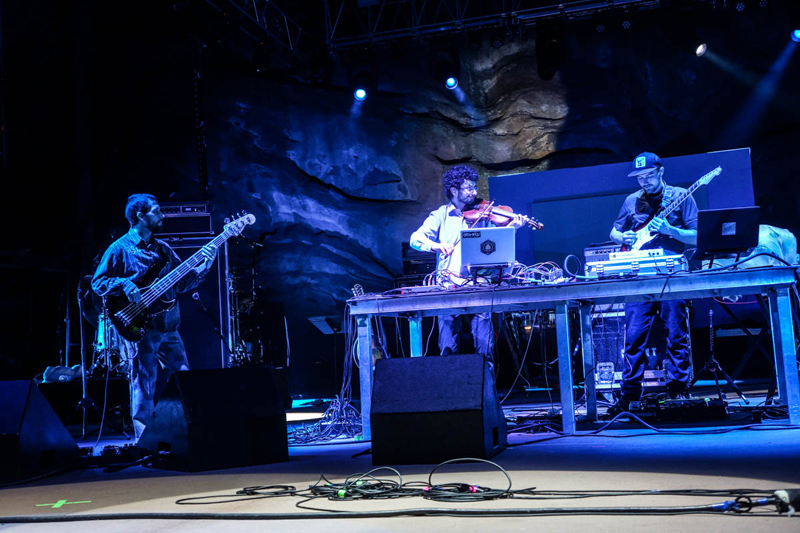 When the Emancipator Ensemble took the stage, my tactical journalist brain simply disappeared. I possess no concrete recollection of what songs they played not due to excessive intoxication, but because I became completely immersed in the music. With Doug Appling aka Emancipator on guitar, Ilya Goldberg on violin and mandolin, Colby Buckler on drums and a mystery man on bass (seriously, no one on the internet seems to know this guy’s name), the ensemble churned out a variety of different sounds.

When I saw them in Seattle on March 27 at The Showbox, the guys played a more mellow, symphonic set, for which Emancipator is typically known. But Red Rocks’ grand setting must have beckoned them to unleash their wild side a little as they kept switching between several different styles. Their set seamlessly morphed from more upbeat jams back into slower ballads that flow through your mind like a meandering river.

At one point, I snapped out of my trance to remember a particularly energetic “Safe In The Steep Cliffs” jam, and judging by the comments on Emancipator’s Facebook page, I was not alone in my awestruck state. Awash in lights of deep blues, royal purples, and gentle greens, you could tell that the members of the Emancipator Ensemble were legitimately having fun perched on the shoulders of this majestic rock formation.

The stage cleared out and a swarm of technicians buzzed about setting up for the main act. Our collective energy began to rise like a pot of boiling water, slowly building in anticipation of what was to come.

“Hey man, you need any doses?”

Wide-eyed acid peddlers wandered about the stands in search of customers. Not tonight, stranger, I have to stay relatively clear headed if I’m going to cover the fantastical charade we’re about to witness. 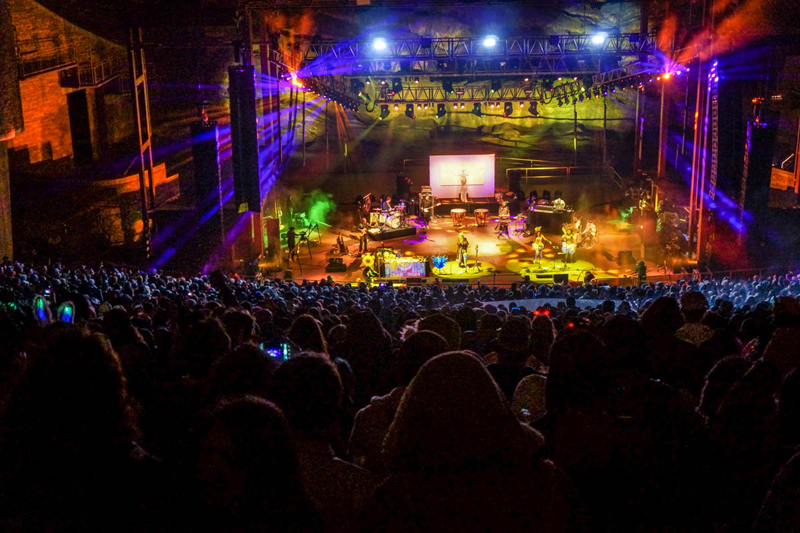 After a lengthy post-Emancipator break, the house lights cut out suddenly, bringing the crowd to its feet. This is it; this is what we’d been waiting for since December, what we’d trekked up mountains and across state lines to see. What ensued was the most beautiful, bizarre and enthralling spectacle I’ve ever seen.

As the band exploded into “Brain In A Fishtank,” the single from Shpongle’s most recet album, Museum of Consciousness, it was hard to keep track of everyone on stage. Besides Mr. Simon Posford on guitar and Raja Ram on flute (as well as a host of other tribal instruments), the band included a violinist, a cellist, a bassist, several drummers including a hang drum, a few vocalists and a small army of dancers among others.

We saw Raja engaging in a dance battle with a Thai monkey king during “Divine Moments of Truth” and a giant black horned demon on stilts. We saw what can only be described as a colossal tie-dyed slinky man —imagine a stick figure only instead of having sticks for limbs, it consists entirely of hula hoop-sized slinkies. Behind the band, a woman was hand painting (literally, painting with her hands) a mural of an orange and blue eye that stared back at us, begging the question, “what are you looking at?” But its gaze did not threaten or offend: it meant to trigger a serious introspection of reality. For most of the show, I really couldn’t tell exactly what I was looking at. Did I just get secondhand high from all the DMT wafting through the air? No, this was real. It was extraordinary weirdness, but it was definitely happening. 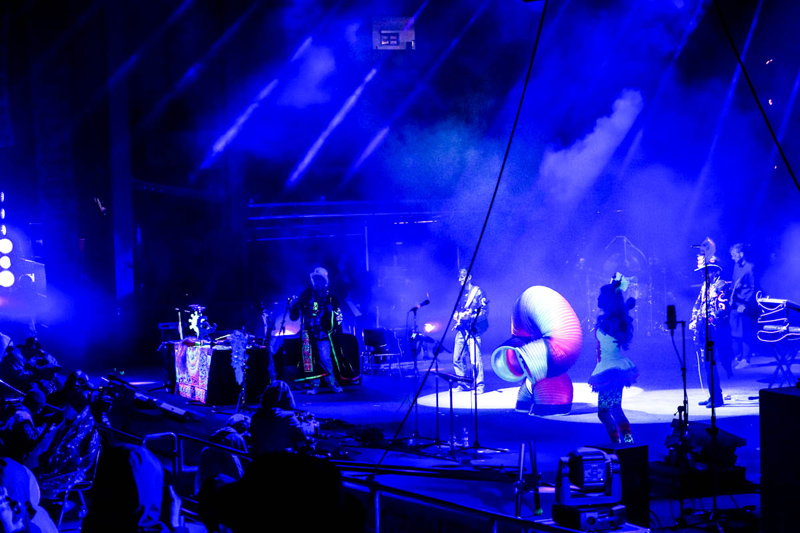 Shpongle is known for crafting psychedelic trance that draws inspiration from an endless well of world music. One minute, the mind-bending rhythms will toss you into the jungles of Central America and the next have you scaling India’s jagged mountains. It melts from Arabian chanting to sound bites of visionary thinkers like Terence McKenna talking about their experiences with mind-expanding substances. During “Dorset Perception,” which features a Spanish flamenco guitar, I experienced the electric feeling of frisson. Frisson is that sensation of shivers going up and down your spine. I almost had to sit down due to the shockwaves of pleasure bouncing around my vertebrae. Shpongle pushes you to the edge of (and often beyond) your sensory capabilities.

About halfway through Shpongle’s set, the rain finally decided to join us. It was a humbling reminder that we are ultimately at the mercy of the elements, but it hardly affected the collective mood. Before the encore of “Around The World in a Tea Daze,” Simon thanked us for joining him and his tribe in this beautiful sacred place. Gazing around the terraced seats revealed a colorful cast of characters from fully-fledged freaks to smiling couples in their sixties sharing a loving embrace.

The experience left me reveling in the sheer outpouring of creativity and cohesiveness that conspired to make this show happen. I sincerely thank all of the musicians, technicians and staff members who had a hand in materializing Shpongle on the Rocks into such a spectacular dream.