Markus Schulz might be known for his distinct style of trance — deep and dark yet somehow melodic — but he’s still a crowd pleaser at heart. Playing in front of hundreds of fans at Ruby Skye for a set that will later air on his Global DJ Broadcast, Schulz gave a memorable performance last Friday with plenty of energy and a solid list of songs, both old and new.

The songs he played were diverse, ranging from his trademark “Perfect” to Cosmic Gate’s “Find Yourself” to up and coming progressive trance songs such as Stoneface Terminal’s “Don’t Give A Fuck” and Sweetmad’s “Bring Me The Dawn.” Schulz made sure the crowd was on its toes, whether he was dropping a pulsating beat or interacting with them on a more personal level.

The musical highlight of my night was probably during Schulz’s rendition of “Lost Connection,” which tore the place down as it always does. A few friends and I leaned against a speaker in the back as the song slowly built up, but we knew our rest would be short. The breakdown came, and we hopped around like six-year olds who just got out for recess. We might have covered about 50 feet of the Ruby Skye dance floor in the process. I’m only one person with one opinion, but if you ask me, that’s what dance music is all about.

The atmosphere was solid—although not ideal—as it usually is at San Francisco’s premiere electronic dance venue. There were plenty of drunkards on the dance floor, which often translates to unwanted advances and uncontrollable stumbling. But that is to be expected at pretty much anywhere worth going to on a Friday night, and most of us have stumbled uncontrollably at one point or another anyway. Much of the crowd cleared out at around 3 a.m., leaving plenty of space for the fans who had no plans of leaving until the tables were off and the lights on.

Now at No. 8 in the DJ Magazine Top 100, it is clear that Schulz has become a more mainstream DJ in the last year or two. His set certainly contained a number of songs popularized through Armin van Buuren’s “A State of Trance,” but that is not a criticism of Schulz—what is a DJ worth if he’s not playing songs people know? The only question about Schulz is if—and how far—he will be able to rise from his current standing as the eighth best DJ in the world. Schulz is certainly a great DJ, but his style of dark trance may never be able to carry him to the top five. Four of the five top DJs in the world all stick to what is essentially traditional (uplifting) trance, and the fifth member of that group is de facto pop star David Guetta.

That said, Schulz seems to have picked up on the importance of playing mainstream trance, and his set was filled with it Friday night. Whether or not he ever reaches the top of the game, the German-born American has done more than enough to make his mark in the world of electronic dance music. You know you’ve made it when a crowd is chanting your name, and that’s exactly what the partygoers at Ruby Skye were doing as his set came to a close. 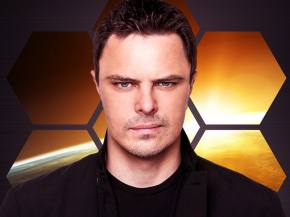